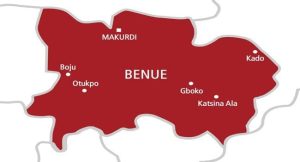 Four people have been reported dead in Oye Obi community, Obi Local Government Area of Benue State which has been hit by an unidentified sickness.

A report made available to newsmen on the illness said the victims developed the same symptoms of headache, vomiting, internal heat, stomach ache, weakness of the body and swollen stomach.

Those already killed by the strange sickness were identified as Happiness Ogbu, Onah Ogbedu, Andy Edu and Wisdom Agwo, all said to have died in the last two weeks.

The Igede National Youths Council in a letter on the development, signed by its president-elect, Andyson Egbodo, called on relevant government and health institutions to come to the urgent aide of the community.

“They developed the same symptoms of headache, internal heat, diarrhoea, vomiting, stomach ache, weakness of the body and swollen stomach and died alike.

“Our investigation revealed the health authorities in Oju have been briefed. The Igede National Youths Council is calling on the Benue State Government to, as a matter of urgency, do all within its powers to arrest the situation.

“We are not resting on our part in the area of mass mobilization and awareness campaign on how to prevent its spread“, the letter read in part.

The association also noted that six more persons as at Wednesday, 29th January, 2020 are already exhibiting similar symptoms noticed in the deceased and some have been moved to the clinic already.

“Our investigation reveals that about six more persons as at today, Wednesday, 29 January, 2020 are already down developing the same symptoms, some of them have already been moved to the General Hospital, Oju.

When contacted, Today.ng reports the state Commissioner for Health, Dr. Sunday Ongbabo, confirmed the strange sickness in the community, adding that the ministry had sent focal persons to the affected area to investigate the situation and ascertain the nature of the endemic.

Ongbabo added that the National Disease Control Centre in Abuja and the World Health Organisation have been contacted for help.

“We have declared a state of emergency on those kinds of strange diseases in the state, put surveillance tracking down all the diseases and see how we can treat them.

“We are also in touch with the National Disease Control Centre in Abuja and the World Health Organisation to come to our aid so that we can identify the disease and enable us to protect others.

“We are just suspecting what is happening there because we have not actually tested the people to know the actual thing that is killing them.

“We are trying to curtail it, avoid its spreading. So far, three persons have been confirmed dead.” the commissioner said.