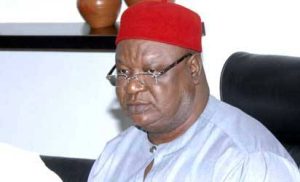 Former Senate President Anyim Pius Anyim has distanced himself from the 2023 presidential campaign poster bearing his picture and currently in wide circulation on social media.

In a statement to newsmen on Thursday, Anyim, a former secretary to the government of the federation, noted that such a campaign poster is capable of distracting President Mohammadu Buhari.

The South-east politician pointed out that President Buhari had just spent only one year and seven months in his second tenure and shouldn’t be distracted.

According to him: ”My attention has just been drawn to posters and stories circulating on social media One of them has the inscription ” progress 2023 Anyim Pius Anyim for President… with my picture on it. I want to state very emphatically that I do not have a hand in those posters and campaigns and did not authorize any such publications”.

“As a law-abiding citizen, I am fully aware that it is not the time for the campaign for 2023 elections”.

“The Government at the Federal level has spent only a year and seven months out of a four-year term, grappling with the issues of governance and so should not be distracted”.

“I join the general public to disregard any such posters and or Publications as they are not from me.”