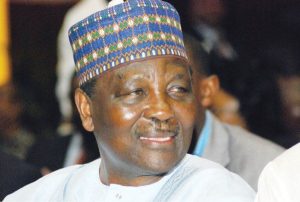 Former military head of state, Yakubu Gowon, has confirmed the paternity of a 48-year-old man recently deported from the United States.

Gowon in a statement released on Wednesday noted that a DNA test had proven Musa Jack Ngodadi is his biological son.

Musa Gowon, who had been in jail in the U.S. for 22 years, was pardoned by President Barrack Obama in 2015, cutting short the 40-year prison term he was to serve for alleged drug related crime of which he was found guilty on November 18, 1992.

The son of the former head of state, returned to Nigeria on January 1, 2016, after the U.S. Immigration officials deported him.

He was the product of a romance in the 1960s between General Gowon, then a military head of state, and one Igbo damsel, Edith Ike-Okongu, who was said to have ended her love affairs with the ex-military ruler over the Nigerian Civil War and how it was being prosecuted under Gowon’s watch.

Edith was said to have protested the manner Nigerian troops had maimed and killed her fellow Igbos, under a government of a man she was in love with.

Conflicting reports say she left Nigeria with a pregnancy or with the child their romance had produced to settle in the U.S., while the then young bachelor, Gowon, got married to his present wife, Victoria.

Edith is said to have later returned to Nigeria after decades in the U.S., leaving behind Musa Gowon who allegedly got involved with some Colombian drug dealers resulting in his arrest and jailing in 1992.

Though he strongly denied being guilty of the crime as he insisted that he was framed up, Musa was sent to a correctional facility to serve a 40-year jail term.

The Igbo Mandate Congress, IMC, which made the return of Gowon Junior a big socio-political event, said Musa suffered the abandonment that later led him imprisonment for 22 years because his mother stood as a patriot of the Igbo nation by severing her relationship with Mr. Gowon in protest of the killing of her kin during the Civil War.

“Musa Gowon was borne out of a courtship gone awry between former Head of State Yakubu Gowon, then a Lieutenant Colonel and an Igbo Girl by name Edith Ike-Okongwu while he was still a bachelor,” said IMC, Director-General, Rev Obinna Akukwe.

“This relationship between Gowon and Edith Ike ended in the heat of the civil war. It is widely believed that the relationship broke off after Federal Troops bombed Aba General Hospital with NAF Napalm Bomb on July 14, 1968 killing more than 500 patients.

“Edith was said to have expressed disapproval with Gowon over the deliberate bombing of Biafran civilian soft targets and the romance was brought to an end. Prior to that, Edith Ike’s parents, though from Aro-Ndikelionwu in Orumba North Local Govt of Anambra State but lived in the north for over thirty years, relocated back to the East after the first wave of pogrom of 1966.”

Edith herself relocated to then West Germany on 30th June, 1967 after Gowon overruled her plans to relocate to either the US of UK.

“The relationship was said to have produced a handsome young man with full name Jack Musa Ngonadi Gowon in 1968. Due to Edith’s constant unease at the indiscriminate murder of civilians, the relationship got frosty and ended towards the end of 1968. In 1969 Gowon married Miss Victoria Zakari, a nurse by profession. Gowon reportedly denied paternity of Musa.”

Following years of doubts and speculation, a DNA test was recently conducted to ascertain the paternity of Musa Gowon who recently returned to the country.

The results of the tests were conclusive and they confirm his paternity.

We, the family, are working to assist in his rehabilitation following a very difficult period in his life.

As we look forward to the future with faith in God, we request that our privacy be respected.