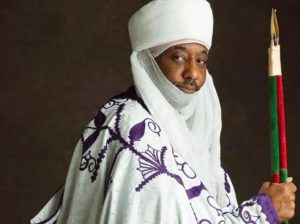 Former Emir of Kano, Muhammadu Sanusi II, has reacted to the report on the abduction of his cousin.

Sanusi in his reaction debunked the abduction of his cousin insisting that all his family members are safe.

National Daily had reported that the former Emir’s cousin was kidnapped along Abuja/Kaduna roads.

The former monarch while speaking on the development noted that he would be the first to release a statement if the abduction happened.

“In any case, I expect the media more specifically those who wrote the story to get in touch with me to verify the story before going to the [ress and thereby endangering my family members”.

However, it was disclosed that the person allegedly abducted is Aminu Musa Abdullahi, the son of the former Vice Chancellor Bayero University Kano Professor Musa Abdullahi.

Aminu have been reported to have regain freedom from the kidnappers last night.