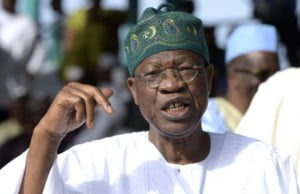 The Minister of Information and Culture, Lai Mohammed, on Saturday called on broadcast media in Nigeria to take the lead in telling happens in Nigeria.

Mohammed in his statement noted that the decision would guide against the distortion of facts by a section of the foreign media.

The minister stated this in Oko, Oyo State while commissioning the 89.3 FM Station on Saturday.

“I challenge broadcast media in Nigeria to take the lead in telling the Nigerian story.”

“A situation in which foreign broadcast stations arrogate to themselves the power to tell our own story gives room for distortion of facts.”

He added that if the local broadcast media had taken up the challenge, CNN would have relied on them for news about End SARS in particular and other happenings in Nigeria.

“A situation in which the local media will rely on and quote a foreign broadcast media, for an event that happened in Nigeria, is an anomaly. It has to stop,” he said