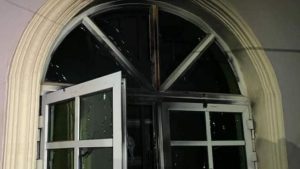 The Oyo State Fire Service has given an update on the fire incident that happened in the Ibadan home of popular Yoruba activist, Sunday ‘Igboho’ Adeyemo.

Naija News had reported that the house located in the Soka area in Ibadan, the Oyo State capital, got burnt in the early hours of Tuesday.

Confirming the sad incident, one of Igboho’s aides said the attack could be a reprisal, adding that Igboho would continue to champion the course of Yorubas.

He said: “Igboho has two houses in Soka. The old and the new one where he lives now. The old one got burnt overnight. We suspect foul play. It could be the work of people who don’t like what we are doing to liberate Yoruba from the oppression.”

Speaking to reporters in Ibadan, Director of Operation of the service, Ismail Adeleke, said no life was lost in the fire incident.

Adeleke revealed that officials of the state fire service eventually put out the fire, adding that it was only the waiting room and the corridor of the building that was affected by the fire.

The Fire Service official said items destroyed by the fire were a Plasma television set, air conditioners, and chairs.

Adeleke, however, said an investigation has begun to ascertain the cause of the fire.

According to the police, an investigation has commenced into the incident while Police officers are on the trail of the hoodlums.

“At about 0620 hrs of today 26/01/2021, report was received at Santo Police Station that some unidentified hoodlums came to Sunday Igboho’s house at SOKA area of Ibadan in a Hummer bus and Micra firing sporadically, and set the house ablaze,” the police said.

“Immediately the DPO Sanyo got wind of the incident, he contacted Fire service while he also went to the scene for on the spot assessment.

“The fire was eventually put out.

“Investigation has commenced into the incident while the Police is on the trail of the hoodlums.”