A catastrophic fire engulfed Notre Dame Cathedral in Paris, one of France‘s most famous landmarks, altering the city’s skyline in the process.

A report by BBC says the fire began at around 18:30 (16:30 GMT) and quickly reached the roof of the cathedral, destroying its stained-glass windows and the wooden interior before toppling the spire.

French officials say the 850-year-old Gothic building’s spire and roof have collapsed but the main structure, including the two bell towers, has been saved. 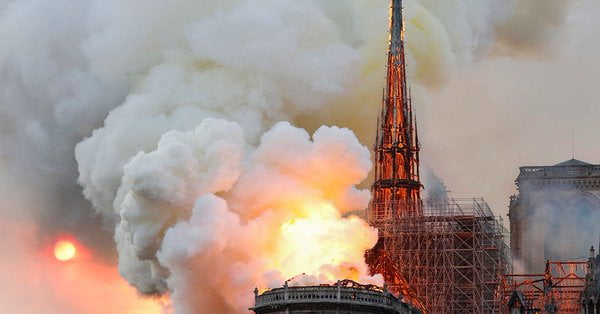 The report monitored by Naija News, says firefighters are still working to contain the blaze as teams try to salvage the artwork stored inside.

Though the cause of the fire outbreak has not been ascertained, French officials, however, say it could be linked to the renovation work that began after cracks appeared in the stone, sparking fears the structure could become unstable. 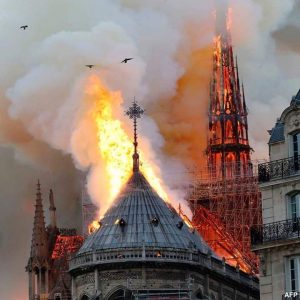 In the same vein, the Paris prosecutor’s office said it had opened an inquiry into “accidental destruction by fire”.

The outbreak in its wake left a firefighter seriously injured during the process of tackling the blaze.

Notre Dame de Paris before and after the fire pic.twitter.com/XxHtlWIedi

Also speaking, Historian Camille Pascal told French broadcaster BFMTV that “invaluable heritage” had been destroyed, adding: “Happy and unfortunate events for centuries have been marked by the bells of Notre-Dame. We can be only horrified by what we see”.