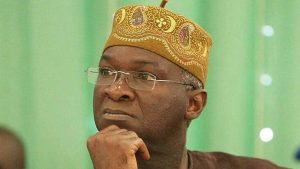 The Minister of Works and Housing, Mr. Babatunde Fashola has told the National Assembly that the N76.4bn allocated to his ministry in 2021 budget will not be adequate.

This is as he revealed that the federal government through his ministry, is already owing 3,504 contractors handling various projects across the country the sum of N69.9bn.

Fashola made the disclosure on Thursday when he appeared before the joint National Assembly Committee on Housing, to defend his ministry’s 2021 budget figures.