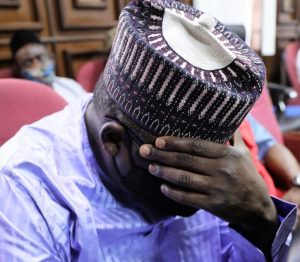 The Federal High Court in Abuja has denied the former Chairman of the defunct Pension Reform Task Team, Abdulrasheed Maina, a request for an adjournment to prepare for his defence.

Maina is facing a 12-count charged bordering on money laundering to the tune of N2 billion.

Justice Okon Abang, in his ruling noted that the judgement was passed at court’s discretion.

He added that the plea filed before the court is a plan to waste the judicial time of the court, NAN reports.

Counsel to the Economics and Financial Crimes Commission, Farouk Abdullah, told the court that the matter was slated for continuation.

Maina’s new lawyer, Anayo Adibe, however, objected on grounds that the legal team was just taking over the case and needed some time to prepare.

Justice Abang in his response noted that since the matter resumed on September 29, Maina failed to appear in court until a bench warrant was issued against him.

He added that the issue of fair hearing is not applicable because Maina is not just coming into the matter for the first time.

“The issue before the court has to be properly made not on a sentimental basis. The 1st defendant (Maina) jumped bail without reason to do so.”

The Judge stated that if Maina’s lawyer needs his case file, he should reach out to the former counsel for him to hand over the file to him.

“And if Joe Gadzama (former counsel) fails, the new counsel knows what to do. An administrative letter to a registrar cannot serve as a stay of proceeding. The new counsel cannot drag us into his own internal affairs”

Justice Abang, who noted that Maina had been offered adequate opportunity and time for his defence, refused to grant his application.

Recall that Maina was arrested in Niger last week Monday by operatives of Nigeria Intelligence Service and anti-corruption agents.

Maina had fled the country to escape trial for the allegation levelled against him.