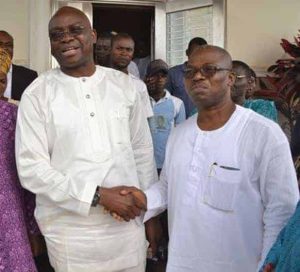 Former Governor of Ekiti State, Ayodele Fayose, has spoken on his reconciliation with an ex-governor of the state, Segun Oni.

The Peoples Democratic Party chieftain on Sunday called on all members of the party in Ekiti State to desist from insulting, mocking or embarrassing Segun Oni.

Fayose further stated that despite the reconciliation, he has not endorsed Oni’s Gubernatorial ambition.

“True leadership is demonstrated by forgiveness, followed by restoration after a show of true humility. However, this statement does not represent or amount to endorsement of Engr Segun Oni’s gubernatorial ambition.”

“Rather, it is part of our sincere efforts to keep the party together and accommodate everyone, except those members who are due for political perdition. Once again,I congratulate the State Chairman, Bisi Kolawole and other members of the State Exco. I wish them a successful tenure.”