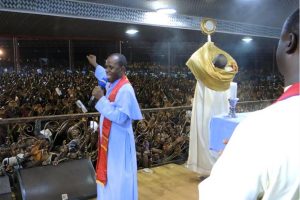 The adoration ground owned by Adoration Ministry in Enugu, southeast Nigeria, headed by Rev. Father Ejike Mbaka, is not on fire as widely reported in some section of the Nigerian media.

Naija News understands that several reports emerged on Thursday afternoon that Father Mbaka’s adoration ground was on fire. The report came at a time hoodlums are burning properties across the nation.

However, reacting to the news of the viral video suggesting that the Catholic Adoration Ground Enugu superintended by Father Mbaka was razed by protesting youths seeking an end to police brutality in the West African country, the church said it’s not true.

Maximus Ugwoke, the spokesman of Father Mbaka who spoke with Vanguard after the news of the supposed fire outbreak at the Adoration ground, said the story and video making the rounds were false and should be disregard.

Speaking further, Ugwoke stressed that he suspected that the report of the fire incident emanated from an online media practitioner based in Enugu whom he said has written a rebuttal and asked people to ignore the mischief.

The spokesman of the controversial Catholic Priest promised to make an official statement on the issue after consultation with the priest.