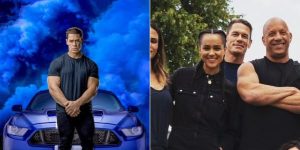 American professional wrestler and actor, John Cena has been added to the list of superstar actors that will be featured in Universal Pictures’ latest installment to The Fast and the Furious franchise; The Fast Saga, or simply F9.

Naija News learnt that the wrester made this known stopped by the “Extra” studio, where he opened up to Fast & Furious 9,” and some other movie project he is working on presently. he also revealed he isn’t leaving WWE for acting.

He insisted, “I’m not done with WWE yet… Keep in mind that being a sports entertainer is like being an actor. You have to invest your full passion into it. Due to insurance liabilities for movies, you can’t do other stuff…. I am far from done with the WWE. I am trying to change perception — it’s not a transition.”

Cena is now a part of the “Fast and Furious” family as he joins the ninth installment. He teased, “We are gearing up to drop a trailer soon and that is going to shake everybody up.”

Sharing his experience, he said, “At first it was like being the new member of a family… Everyone is sizing you up… They were all so open-minded, and I got to know everyone quickly and was welcomed into the family.”

However,Cena’s character was revealed in the new posters for Fast & Furious 9, released by Universal together with the returning cast members, and Justin Lin returning to directing in the franchise, after helming Fast & Furious parts 3 through 6.

The movie which will hit the cinemas in May will see Vin Diesel’s Dominic Toretto slugging it out against a new mystery character brought to life by Cena.