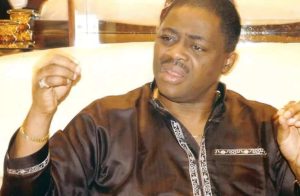 Former Minister of Aviation Femi Fani-Kayode has berated the national leader of the All Progressives Congress (APC), Bola Tinubu, for questioning the motive of Lekki #EndSARS protesters.

Recall that Tinubu during a visit to Governor Babajide Sanwo-Olu on Saturday said protesters killed at the Lekki toll gate area of Lagos State, Nigeria’s commercial city, “have questions to answer.”

“Those who suffered casualty during the gunshots need to answer some questions too. Even though we want to help, we still must extract information that will help the government to prepare in future and understand how and when to react because the governor, in particular, is a youth,” Tinubu had said.

Reacting ina post on his Facebook page on Sunday, Fani-Kayode regretted supporting the former Lagos State Governor in the past.

He said it was disappointing that Tinubu would seek to shift the blame on the victim rather than the attackers.

Fani-Kayode accused the APC stalwart of being willing to do anything to achieve his presidential ambition.

He wrote, “Sadly, instead of exhibiting any remorse or displaying any regret for this abominable atrocity, with a sheepish smile and a sneering and jocular tone, you had the sheer nerve and effrontery to say nothing other than that you are still the Asiwaju of Lagos and the Jagaban?

“Yet, what was even worse than this and what shocked and astounded all right-thinking people all the more was that you had the temerity to go on even further to say that the ‘casualties at the Lekki shooting have some questions to answer!’

“How cruel can you be? Not a word of condolence or expression of commiseration to the families of the dead but instead you offered stupid questions and baseless accusations against their wards and children who were butchered in the most brutal circumstances and heartless manner. ”

“You only harbour love, which borders on obsession, for your vain and lofty ambition to rule Nigeria and trust me when I tell you that this will never happen,” Fani-Kayode said.