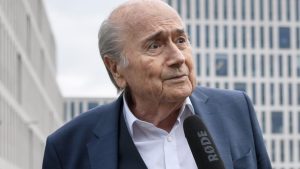 Former FIFA President, Sepp Blatter has been admitted to a hospital in Switzerland.

The daughter of the former football chief, Corinne Blatter, made this known to Blick on Friday. She, however, noted that her father is in a ‘serious but stable’ condition.

She said: “My father is in the hospital and is getting better every day. He needs time and rest.

“On behalf of my family, I ask for privacy.”

The disgraced former football chief is expected to pull through after being rushed in on Thursday, according to reports in Switzerland.

Blatter was removed from FIFA’s top job back in 2015 after 17 years of heading up the footballing governing body.

He was accused of corruption throughout his time in the post and was forced to step down ahead of the 2015 elections.