The reality show star praised the actress for becoming the “white sheep” of her family.

Though many Nigerians had spoken against the marriage between the duo, Gifty has decided to see the relationship from a different angle.

Gifty in her post praised Regina Daniels for being brave and determined.

In her statement, she noted that the Nollywood actress has proven herself to be a leader willing to make a huge sacrifice for her family.

The reality star further stated that she has been in the same position in the past so she understands how it feels.

According to Gifty, she also said, “age is nothing but a number”.

The BBNaija ex-housemate also praised Regina Daniels’ mother, she stated that the actress’s mother was doing what was best for her daughter. 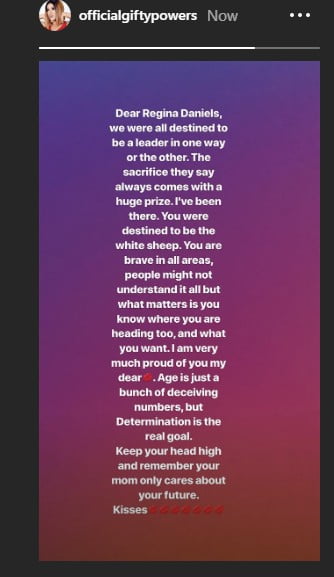