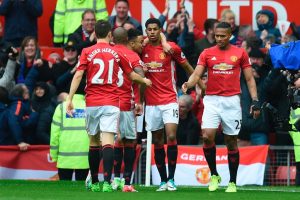 English Premier League side, Manchester United on Wednesday defeated LASK 2-1, while Inter Milan defeated Getafe 2-0 in rescheduled clash due to the outbreak of Coronavirus.

The Red Devils had 5-0 lead from their first leg played in March and will now play against Copenhagen who defeated Istanbul Basaksehir 3-0 on Wednesday.

Antonio Conte’s Inter Milan will face either Steven Gerrard’s Rangers or Bayer Leverkusen with the Germans holding a 3-1 lead going into Thursday’s match.

Romelu Lukaku and Christian Eriksen scored either side of the break for the Italians.

“It was a difficult match against a team that plays aggressively, but we did well, the defence did a good job and I’m happy to score for the team,” Lukaku told Sky Sport Italia.

“Christian also got an important goal for the side and we must continue like this.”