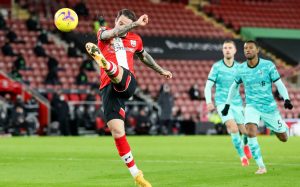 The Reds were denied the privilege to earn 3 points to lead the league table after a 2 minutes goal from Danny Ings in the first half of the game.

Although the Reds remained at the top of the league table with goal differences ahead of Manchester United, the Jurgen Klopp side may, however, drop from the top should the Red Devils win their 17th league game against Burnley on January 12, 2021.

Meanwhile, Norwegian professional football coach, Ole Gunnar Solskjaer, has reacted to the appointment of Darren Fletcher as a new coach at Manchester United.

Naija News reports that the Manchester United boss in his reaction on Monday following the arrival of the new coach noted that Fletcher would be a great boost to the club’s coaching staff.