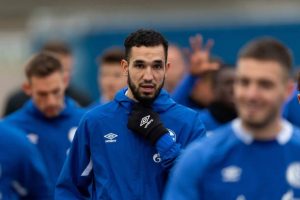 French-born Algerian National Football star, Nabil Bentaleb, have been confirmed to play with the English Premier League side, Newcastle United for the rest of the season, although with an option to make the deal permanent.

Bentaleb will be playing with Newcastle throughout this season on loan from Schalke 04 until the deal is permanently sealed, Naija News understands.

Bentalab while speaking on his return to Newcastle with the club’s official website, said: “I’m very happy to come back to the Premier League, especially with a club such as Newcastle.”

“The project really interested me. I wanted absolutely to come back to the Premier League. The coach had some trust in me and the club also – I saw that straight away – and I think it’s the perfect move for me.”

“Newcastle United head coach Steve Bruce said: “He’s somebody who I paid particular attention to when he was at Spurs when he broke through and got a big-money move to Germany.

“He’s played at the highest level now for the last four or five years but he will come in hungry and feeling he has something to prove and will give us the competition we obviously need.

In another news, Naija News reported that UEFA Champions League record winners, Real Madrid, has confirmed the signing of Brazilian youngster, Reinier, on a long-term deal.

The highly-rated wonderkid signed a long-term contract with Real Madrid that will run till 2026.