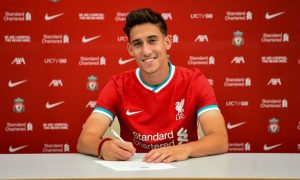 The 24-year-old left-back on Monday, August 10 signed a five-year contract with the Reds, Naija News understands.  Tsimiakos would, however, become a second choice on Jurgen Klopp’s squad after Andy Robertson.

Naija News understands that Liverpool manager had made a push for the Olympiakos player after the club could not agree to a term with Norwich for their Northern Ireland left-back Jamal Lewis.

The player who made the first close-season signing for the Reds while speaking with the club’s website said; “I’m very happy, I’m very proud to be here. For me, (it is) the biggest club in the world.”

“The league here, I like a lot. I watch it on the TV and it was always one dream I had from when I was a kid to come to play in this league.”

The player added, “I want to achieve (our) goals. To win the league again and also to win the Champions League.”

Meanwhile, Liverpool is reportedly set to spend £35m to sign Wales midfielder David Brooks, 23, from Bournemouth, according to the Sun.