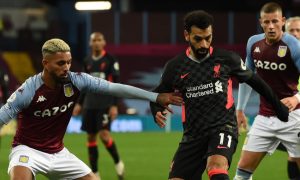 Naija News understands that the reds were beaten to 7-2 by Aston Villa in the EPL game on Sunday night.

This is obviously the worst performance by the reds so far under manager, Jurgen Klopp. Dean Smith’s side defeated the best team after a 4 minutes opening goal from Ollie Watkins who later netted two more goals in the 22, 39 minutes respectively.

Villa again had more goals in the 33, 55 minutes of the game from John McGinn and Ross Barkley who recently joined the club from Chelsea FC. Two more goals from Jack Grealish sealed up the 7-2 victory for the Villas.

However, Liverpool forward, Mohamed Salah, earned two goals for the reds in the 33, 60 minutes of the Sunday night clash.

Naija News understands that four Liverpool key players, the likes of Sadio Mane, Thiago Alcantara, Henderson and keeper Alison were ruled out of the Sunday night game at Villa Park due to injury and positive cases of COVID-19 among the players.