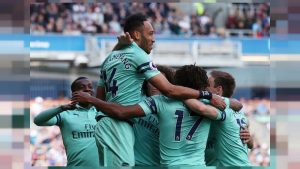 The line-up for Arsenal’s clash against English Premier League side, West Bromwich Albion, on Saturday night has been confirmed.

The club released the list for its starting eleven on its website, with France striker, Lacazette, who got the Gunners a win in their last match starting the game today.

The Mikel Arteta men will be matching into this match after defeating Brighton on Tuesday night.