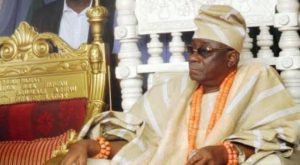 The Oba of Lagos, Rilwan Akiolu, on Friday, returned to his palace, Iga Idungaran, Lagos Island, two months after he escaped from an attack on his palace.

The Senior Special Assistant to the Lagos State Governor on Health, Oreoluwa Finnih, in a video posted on Twitter, shows the monarch wearing a mask and dancing towards the palace with his entourage.

Recall that the monarch was taken into safety by military officers when hoodlums, who had hijacked the #ENDSARS protests, stormed the place.

The hoodlums during the attack on Oba Akiolu’s palace made away with the staff of honour and plundered the palace for two days.

Lagos Island which house the Palace saw police stations, the family house of Governor Babajide Sanwo-Olu and other government properties destroyed during the protest.