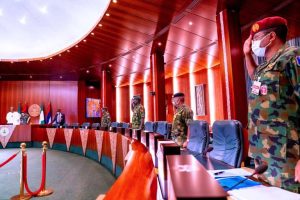 President Muhammadu Buhari has promised to furstrate any  repeatition of the #EndSARS protests that rocked the country in October.

Speaking at the meeting of the National Security Council (NSC) on Tuesday, the president said “relevant stakeholders”, including the youth, will be carried along to forestall a repeat.

Naija news had earlier reported  that those in attendance include the Vice President, Professor Yemi Osinbajo, Boss Mustapha, the SGF, the President’s Chief of Staff, Ministers, the nation’s service chiefs, the Inspector-General of Police and Heads of Intelligence Agencies.

The meeting was still on as at time of filling this report.