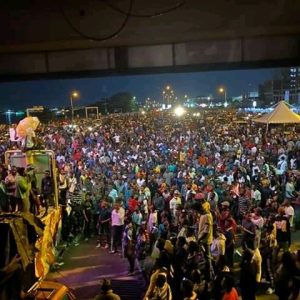 The Lagos State Commissioner for Information, Gbenga Omotosho has appealed to youths to shelf their idea of a fresh protest on Saturday over the 2020 Lekki tollgate incident.

The youths had chosen Saturday 13th February to protest the decision of the Lagos judicial panel of inquiry to open the Lekki tollgate for operation.

It will be recalled the Lagos judicial panel of inquiry investigating the alleged extrajudicial activities of the now-disbanded Special Anti-Robbery Squad (SARS) approved the reopening of the Lekki tollgate.

This comes weeks after the controversies surrounding the clash between #EndSARS protesters and security operatives at the Lekki tollgate on October 20, 2020.

The nine-man judicial panel on Saturday returned the control of the tollgate to the Lekki Concession Company, the operators, on Saturday.

This follows an appeal from the LCC since December 2020 for it to be allowed to take over the plaza for repair and insurance claims.

However, after the decision, the youths started an online protest with the hashtags #RevolutionNow and #OccupyLekkiTollGate noting that it was wrong to reopen the tollgate for business when justice had not been served on the alleged killing of protesters during a clash with security operatives in October 2020.

Information from the online posters showed that the protest is planned to go physical at 7 am on Saturday, February 13, 2020.

But the Lagos State Commissioner for Information, Gbenga Omotosho, during an interview appearance with Arise TV on Thursday, appealed to the youths to shun the idea of another protest, noting that nothing good can come out of it.

Omotosho warned the protester against causing fresh trouble, saying, “We all saw what happened in October last year. How some of the iconic buildings in Lagos were razed. We saw how human lives were wasted, including policemen and nobody prays for that kind of thing to happen in Lagos again. Because of that, the Lagos State Government has been suing for peace.

“We have been meeting traditional rulers, youth organisations, civil societies, and people we think can influence things for us not to have the kind of thing that happened in October last year. As it is now, Lagos will require peace to grow our economy. We need peace for Lagosians to display their creative skills.

“Nobody wants to go back to the scene of October 2020. We are appealing to both sides not to cause trouble in Lagos. They should allow peace to reign so that we can continue to focus on the economic and social issues that are facing us.

“We have COVID-19, all manners of things that are coming up that the state government is tackling. This is going to be a big distraction. We are appealing to both sides. Lagos belongs to all of us.”

Meanwhile, some youths are also planning a counter-protest at the Lekki tollgate on Saturday, February 13, same time and venue as those against the reopening of the toll gate.

The counter-protest has been trending on Twitter as #DefendLagos and #DemNoBornYourPapaWell.