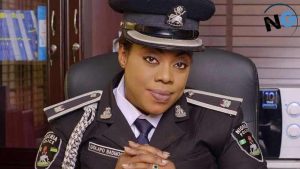 There were speculations that Assistant Commissioner of Police, ACP, Abayomi Shogunle and Chief Superintendent of Police, Badmus were demoted

Further report revealed that 37 others were set for dismissal due various acts of misconduct.

Badmus, however, in her reaction on Twitter said the reports are fake.

“Whoever slotted my name in that list is a joker. I will forever respect people’s human rights, my name will never be put up as one who has violated another’s right.”