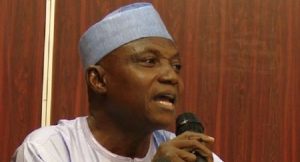 The presidency has been condemned by the Human Rights Writers Association of Nigeria, following its recent statement that End SARS promoters should be made to face the law.

The presidential aide while speaking on hijacking of the End SARS protest said those behind looting would be made to face the law.

The right group in its reaction to the comment of Shehu noted that he needs to return to school to understand how Nigeria’s constitution works.

The National Coordinator of the group, Emmanuel Onwubiko, said, “The Special Assistant to President Muhammadu Buhari on Media and Publicity, Garba Shehu needs to return to a good School to learn lessons about the essence, import, significance and eternal values of constitutionalism and democracy, so he understands that peaceful protests by citizens against the misconduct of the members of the policing institution of Nigeria are lawful, constitutional.”

“Shehu is bereft of deep knowledge of the workings of constitutional democracy which was why he told a television station those citizens who participated in the peaceful marches against police excessive deployment of force.”

“For the avoidance of doubts, Garba Shehu needs to be told that democracy without peaceful protests is dead just as the Constitution in chapter 4 permits the citizens to demonstrate constructively against oppressive styles of governance.”

The group condemned the Central Bank of Nigeria, CBN, Godwin Emefiele for linking  promoters of the End SARS protests with terrorists.

HURIWA described Emefiele was a “puppet and a stooge of President Muhammadu Buhari” who is “tormented and terrorized by the truth.”

The rights group also rebuked the CBN governor for deviating from his core duties and statutory obligations.

The group further stated, “CBN GOVERNOR through his ineptitude and crass incompetence has driven the value of the nation’s national currency to hover around the same vicinity of disgrace and ignominy with the worthless wheelbarrow Zimbabwean currency.”