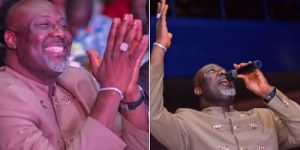 The former senator that represented Kogi-West in the upper chamber of the National Assembly, Dino Melaye has mocked APC National chairman, Adams Oshiomhole has released a new song to mock.

The Independent National Electoral Commission, INEC on Sunday declared Obaseki winner of the governorship election with a margin of 84,235 ahead of his rival, Pastor Osagie Ize-Iyamu.

Ize-Iyamu, the candidate of the All Progressives Congress, APC, however, garnered 223,622 votes.

Some lyrics of his song were: “All those that took dollars to Edo have lost their money oh.