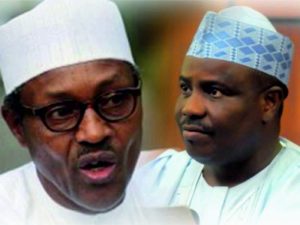 Governor Aminu Tambuwal of Sokoto State, on Tuesday noted that the credibility of the Edo State Governorship election in Edo and Ondo States will go a long way in defining President Muhammadu Buhari’s electoral legacy.

Tambuwal stated this while reacting to US decision to place visa ban on some politicians for their alleged roles in the violence that characterised the November 16, 2019 governorship elections in Kogi and Bayelsa states.

The Sokoto State Governor in a statement released on Tuesday stressed the urgent need to strengthen the nation’s electoral process, to restore the hope and aspirations of Nigerians in democracy.

The governor, who also wrote in commemoration of the International Day of Democracy, marked globally every September 15, said, “Indeed the upcoming gubernatorial elections in Edo and Ondo states are a test case of our preparedness for a rule based and consent enabled governance.”

“In 2007, the United Nations General Assembly resolved to observe 15 September of every year as the International Day of Democracy, with the purpose of promoting and upholding the principles of democracy and invited all member states and organizations to commemorate the day in an appropriate manner that contributes to raising public awareness.”

“The preamble of the resolution affirms that while democracies share common features, there is no single model of democracy and that democracy does not belong to any country or region…democracy is a universal value based on the freely-expressed will of people to determine their own political, economic, social and cultural systems, and their full participation in all aspects of life”.

“This had traversed the whole period of pre and post-independence struggle, the First, Second, Third Republics and our current experiment since 1999.

“In our contemporary Nigeria, many young people who did not participate in the various struggles may not understand the intensity of the price paid by our forebears.

“It is with this in mind that I wish to flag various dangers lurking around and threatening to derail our present democratic experiment.”

Tambuwal, who chairs the People’s Democratic Party (PDP) Governors Forum, said it has become imperative to rethink the role of not just the electoral umpire, but also the activities of various security agencies in the electoral process in such a manner as to instill in them the culture of inflexible support for democracy and its practice.

He emphasised that any electoral victory obtained other than through the legitimate votes of the people is nothing short of a coup d’etat.

“It completely violates our Constitution which envisaged that governmental authority must be obtained only through the will of the people.”

“Going forward, I call on the National Assembly to immediately conclude the long overdue amendments to the Electoral Act to entrench provisions that make it impossible for rigging and manipulation of elections.”

“In the same vein, any further amendments to the Constitution must take cognisance of our experiences in previous elections.”

“It may be that time has come to introduce aspects of technology in our elections that are fool proof and such should be test run with other elections before the general elections in 2023.”

“It bears repeating to say that good governance anchored on a sound economy and corrupt free progressive social, cultural, and infrastructural development is a sine qua non for sustainable democracy.”

“It behooves on us all, particularly the political and economic actors on stage to do our utmost to ensure a stable Nigeria.”

“Finally, I call on the civil society and the press to continue to play its watchdog role of keeping government in check in order to ensure the survival of our democracy.”