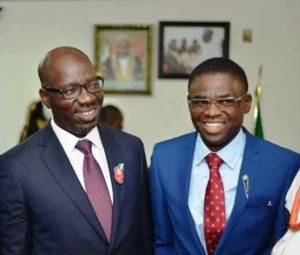 Governor Godwin Obaseki and his deputy, Philip Shaibu will today, Thursday, be sworn into office for their second term at the Samuel Ogbemudia Stadium, in Benin City, Edo State.

Naija News reports that this was made known in a statement on Wednesday by the Special Adviser to the Governor on Media and Communication Strategy, Mr. Crusoe Osagie.

It was gathered that the swearing-in ceremony will be held at the Tennis Court, in Samuel Ogbemudia Stadium.

The governor’s spokesperson stated that all necessary arrangements for the inauguration ceremony have been concluded.

“Due to the prevailing realities of the coronavirus pandemic, we would be having only 750 invited guests at the venue.

“The inauguration is strictly by invitation as crowd control measures have been adopted in line with government’s guidelines to check the spread of coronavirus (COVID-19).

“However, parties are to be held across the 18 local government areas of the state to celebrate the event. Party members are also expected to meet at the ward level to commemorate the event.”

Osagie advised guests expected at the event to adhere to the guidelines regarding crowd control.

“Invited guests are expected to congregate at the pick-up spot at Edo Hotel on Okada Avenue, GRA, Benin City. Cars will not be allowed to access the venue of the swearing-in ceremony.”

“The inauguration will be broadcast live on major television stations and social media platforms. COVID-19 protocols will be strictly adhered to,” he added.