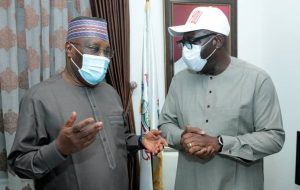 Atiku in a statement on Saturday after an Abuja High Court presided over by Justice Ahmed Mohammed dismissed the certificate forgery suit brought against Obaseki by the APC, noted that the allegation itself was frivolous.

He also commended the people of Edo State and the PDP for the court victory.

He wrote in a statement on Twitter: “I congratulate @GovernorObaseki for his victory in the frivolous suit brought against him for certificate forgery.”

“Kudos to our great party @OfficialPDPNig and the good people of Edo State for standing firmly by the governor, and protecting their electoral mandate from being torpedoed by anti-democratic forces.”

I congratulate @GovernorObaseki for his victory in the frivolous suit brought against him for certificate forgery. pic.twitter.com/ZlrYENOi3E

It will be recalled that the APC and a party member, Edobor Williams had dragged Obaseki to court for alleged forgery of his West African School Certificate O/level and A/level certificates which he used in contesting the Edo 2020 governorship election.

They also alleged that the first-degree certificate from the University of Ibadan which the governor submitted to the Independent National Electoral Commission (INEC) was forged and therefore prayed the court to disqualify Obaseki for allegedly breaching Section 31 (5) and (6) of the Electoral Act and Section 182(1)(J) of the constitution.

But Justice Mohammed in his judgment held that there was no iota of evidence before the court to establish that Obaseki forged either his O’level certificate or the degree certificate that was awarded to him in 1979 by the University of Ibadan.

Meanwhile, the Chairman of the South-West Agenda, a group canvassing for the presidency of the National Leader of the All Progressives Congress, Bola Tinubu, Senator Adebayo Adeyeye, has reacted to the statement of the former Governor of Ogun State, Olusegun Osoba, who claimed that it is too early to start the campaign.

The APC chieftain had stated on Tuesday while speaking on Arise TV that Tinubu had the right to contest for presidency in the 2023 general election, however, stated that it is too early to start campaigning so as to avoid political miscalculation.

Adeyeye, in an interview with Punch, noted that it is not too early to start mobilizing support for Tinubu ahead of the 2023 presidential election.