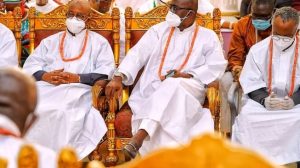 APC governors stormed Benin City, Edo State on Saturday, August 8. They were in the state to launch the party’s gubernatorial campaign ahead of the September 19 elections in the state.

Then there is Mai Mala Buni of Yobe State, who is the party’s interim chairman. Other party leaders in attendance included Ovie Omo-Agege, Deputy Speaker of the House of Representatives, Rotimi Amaechi, Minister of Transport and Edward Onoja, Deputy Governor of Kogi State.

Mala Buni, while announcing Osagie Ize-Iyamu as the party’s candidate, informed party supporters that the governors had appeared to reclaim the state.

“We are in Edo State to take back our state,” Mala Buni said. “Four years ago, we were here and you voted for the APC and we know that you will do it again. We urge you not to be violent because victory is ours and we are here to win.””