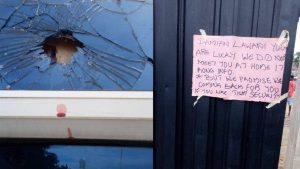 Ahead of Edo 2020 governorship election, unknown gunmen have stormed the home of Edo State Commissioner for Youth, Damian Lawani, dropping a death threat note for the commissioner who was not at home at the time of the attack.

Naija News learned that the gunmen stormed Obaseki Commissioner’s home where they only met his family members, inflicting various degrees of injuries upon them.

It was learned that the gunmen who also promised to return to inflict pains on the commissioner, dropped a message with the inscription: “Damian Lawani, you’re lucky we did not meet you at home. We promise that we are coming back for you. If you like, tighten security.”

Reacting to the new development in a statement, Governor Godwin Obaseki, described the incident as “barbaric” during a visit to the vandalised building on Monday.

“This is a clear evidence of an attempt on the life of my commissioner for youth. This matter has been reported and I understand that investigations are ongoing.

“When you recall the alarm raised by the Deputy Governor, Mr Philip Shaibu, over the weekend that some persons were identified as hired assassins who had been brought into Benin.

“It gives us call for concern that these investigations are taking unnecessarily long.

“We will continue to pursue peace. We will continue to try and use the apparatus of state and I hope that those involved, those who have the responsibility to provide security understand the dangers they are putting the state into.”

Governor Obaseki said the people should not be blamed if they resort to self-defence, accusing the police of turning “a blind eye to the violence being perpetrated by some powerful people” in Edo State ahead of the Edo 2020 election slated for September 19.