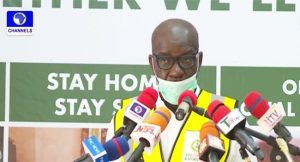 The All Progressives Congress (APC) in Edo State has urged Governor Godwin Obaseki to attend an upcoming governorship debate.

The APC made the call in a statement by the Chairman of the Edo State APC Media Campaign Council, Mr John Mayaki on Thursday.

The party urged Obaseki not to run away from the debate organised by Channels television.

According to Mayaki, the Edo Governor had shown a penchant for giving flimsy excuses for non-appearance in debates.

He promised that the people would be treated to erudite debate from the APC candidate, Pastor Osagie Ize-Iyamu.

“Anyone that can prevail on Mr Governor to be present at the Channels debate should do so, so that he can rescue some of his chances of victory at the polls.

“His absence from two debates already has put people on edge.

“Why is he shying away from answering questions if he knows that he has truly done enough to warrant re-election?”