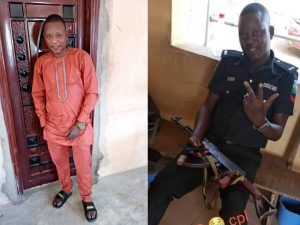 Some men of the State Security Service (SSS) in Osun State has killed an officer of the Nigeria Police Force in the state over a misunderstanding.

Reports had it that Fawale Rauf (a police Corporal) engaged in a brawl with the SSS officials some days ago.

Naija News learnt that the two security groups after the first face-off had ended with fairness, invited Rauf to a joint in the town on Thursday, January 14 where they pounced on him with sticks and rods.

Raul was reportedly beaten to a coma and eventually died in the evening hour of the day at the Osun State Teaching Hospital, where he was rushed to for medical treatment.

Naija News understands that the deceased is attached to the Dada Estate Police Station in Osogbo, Osun State Capital.

Meanwhile, bandits in Kaduna State has reportedly murdered a woman who is said to be due for child delivery.
Naija News reports that the incident happened on Sunday, January 25 along the Kaduna-Birnin Gwari highway.