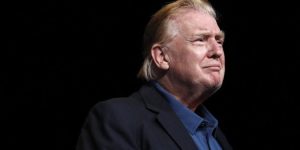 The President of the United State, Donald Trump, has reacted to the death of Kobe Bryant, a basketball legend who died in a helicopter crash.

According to a report, the legend basketballer was travelling on Sunday with three other people on board when the helicopter crashed and fire broke out.

It was reported that Kobe’s daughter, Gianna Maria, was on board and died alongside her father in the crash in Calabasas on Sunday.

Kobe, who used a helicopter to travel for years, was known for commuting from Newport Beach, CA to the STAPLES Center in DTLA in his Sikorsky S-76 chopper.

President Trump who took to his Twitter account to react to the incident expressed sadness over the basketball legend’s death.

He wrote, “Reports are that basketball great Kobe Bryant and three others have been killed in a helicopter crash in California. That is terrible news!”

“Kobe Bryant, despite being one of the truly great basketball players of all time, was just getting started in life. He loved his family so much and had such a strong passion for the future. The loss of his beautiful daughter, Gianna, makes this moment even more devastating, Melania and I send our warmest condolences to Vanessa and the wonderful Bryant family. May God be with you all!”