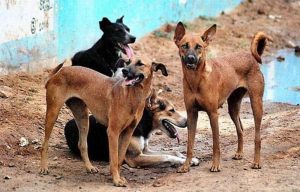 The incident has been reported of a dog that was ‘gang-raped’ on the streets by some individuals in the Bogota area of Colombia.

According to additional reports, the dog was also stabbed up to 30 times by its attackers, leaving the animal bleeding.

The distressing footage of the animal’s condition was shared on Facebook by Liliana Guerrero who mentioned that the dog got stabbed many times and was also sexually abused by many people.

According to her as reported by Daily Star, “because she (the dog) wouldn’t allow it, they stabbed her.”

A resident of the area, identified as Marta Buitrago, who explained that the dog appeared injured and very weak when she found her, the animal was taken by her to the vet for a checkup.

In a later update given by Guerrero, the dog died eventually as it couldn’t bear the pain and injuries sustained during the attack.

“They destroyed her genitals, stabbed her almost 30 times, punched her, and caused other superficial injuries,” she stated.

Naija News gathered authorities in the country have launched an investigation into the incident and similar happenings which sparked outrage on social media.