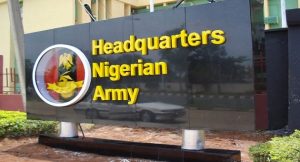 The Defence Headquarters says troops of Operation TURA TAKAIBANGO in conjunction with the Air Task Force Operation Lafiya Dole repelled Boko Haram insurgents when they tried to attack a military base in Marte community, Borno State.

Naija News had reported that suspected insurgents attacked 153 Infantry Battalion and the 22 Armored Brigade and raze down public buildings forcing residents to flee their homes in the community.

The terrorists in their hundreds stormed the recently resettled community in the northern part of the state on Friday evening, shooting from all angles and forcing returnees to flee into the bushes.

According to the statement, the troops also decimated several unconfirmed numbers of the terrorists when they attempted to attack the military base.

The statement reads: “The gallant troops, based on reliable information about the attack, had positioned themselves in an ambush site where they tactically withdrew to and awaited the arrival of the terrorists before they opened fire which led to the fierce battle that resulted in the successes recorded as indicated above.

“The troops are still engaged in pursuit of the fleeing terrorists for further exploitation. Further details of interest to members of the public will be communicated later.”

This online news reports that the military base was also attacked on June 1, 2020, which later relocated to Dikwa and returned to Marte after the brigade was sent there.