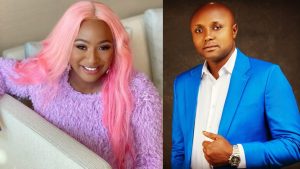 The personal assistant to DMW, Davido, Israel, has finally appealed to popular Nigerian Disc Jockey, DJ Cuppy, after she threatened to file a lawsuit against him over defamation of image.

The daughter of billionaire businessman, Femi Otedola, had demanded a public apology from him for accusing her of making money from a collaboration song with Zlatan, “Gelato” and not sharing the gains with him.

The development saw Nigerians condemn Cuppy on social media and accused her of being greedy.

However, Israel has finally apologized to  DJ Cuppy on Instagram.