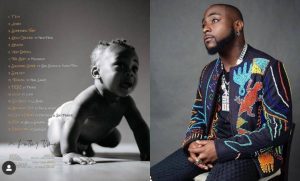 Davido’s Baby Mama, Chioma Avril, has congratulated the singer on the release of his most recent album titled ‘A Better Time’.

Naija News understands that Davido’s ABT album which he used his son, Ifeanyi Adeleke’s face on the cover contained not less than 17 tracks.

Celebrating her baby daddy, Chioma took to her Instagram account on Friday, November 13 to congratulate and expressed how proud of him she is.

“Congratulations king, we’re so proud of you!’ Chioma wrote.

Chioma Avril, has not stayed out of the congratulatory messages trooping in for her baby daddy Davido, following the release of his latest album, ‘A Better Time.’