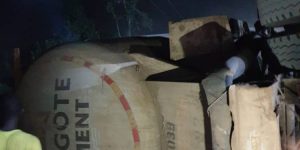 Dangote Cement, the leading cement manufacturing company in Africa, has reacted to a report that it was exempted from border closure by President Muhammadu Buhari.

The cement manufacturer, in a statement signed by Timilehin Oyedare, said the Bloomberg report was misleading and explained that Dangote Cement was not the only company exempted from border closure. The company went on to list BUA Cement and one other gas company as the other two that benefited from the exemption.

“Joseph Attah, the spokesperson for Nigerian Customs Service, was said to have clarified on phone from Lagos.”

“Dangote Cement and other companies in July, 2020 got partial special dispensation to export their products with certain sequence of crossing at Ilela land border in Sokoto State and Ohumbe land border in Ogun State, the company clarified.”