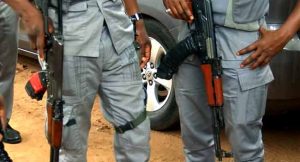 A team of Zone B, Kaduna Customs officers operating on Kamba / Bunza Road shot at a group of youths, killing one and injuring several others, according to the Daily Nigerian.

However, a statement issued by the commission’s spokesperson on Thursday, Ma Magaji, said the youths attacked the officers after they stopped a vehicle carrying sacks of foreign rice which were allegedly imported illegally.

According to the statement, the armed youths attempted to seize the gun of one of the officers.

“As a result, a shot was fired, which unfortunately hit one of the youth on his left shoulder.“

“The injured youth was immediately rushed to the general hospital Kamba, while some of the officers sustained various degrees of injuries. The injured youth, however, later died in the hospital,” he said.

The statement added that a joint security force thwarted an attack by angry youths who tried to set fire to a customs barracks in Kamba.

For his part, Comptroller, Sarkin Kebbi, while offering condolences to the families of the deceased youth expressed his sorrow over the loss of life.

He also warned the youths to refrain from protesting against the security forces carrying out their duties as provided by law.