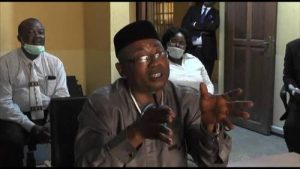 The Commissioner of Police in Cross Rivers State has been called on by civil servants in the state to investigate allegations of certificate forgery against the state’s Auditor-General, Comrade John Odey.

The civil servants in a petition dated July 22 and addressed to the CP, said Odey lacked knowledge in auditing and preparation of financial statement, which is presently causing the state some financial misfortune.

They asked the police to investigate, prosecute Odey to serve as a deterrent to others.

“On behalf of all those whose names were excluded from the Cross River State Civil Service payroll abysmally, I with laden heart, forward this mail and the following documents or / and evidences available in the public domain to help Cross River State.”

“Comrade John Odey wrongfully, criminally, mutilated and injured his age certificate declared by his father contrarily to the principle that any certificate which states that any erasure renders any certificate worthless (See Annexure 1 titled age declaration of John Mpama Odey).”

7 1993 WAEC Senior School Certificate Health Science P7 Pass
Total of 2 credits and 3 passes without a pass in English in all sittings.

“Note: The above result cannot offer anybody an admission to read remedial program in Accountancy, when he has not passed English Language in WAEC SSCE or its equivalent level. In short no academic waiver for such results.”

“His remedial program result was also suspicious. He also used the above inadequate, insufficient, derisory and laughable results to procure a fake admission from the University of Calabar into the post-graduate program in management. The University of Calabar that we know did not and will not offer anybody admission to do a Post-graduate Diploma in Management without minimum entry requirements of five (5) ordinary level credits at two sittings. When UNICAL discovered it, he abandoned the original certificate in the Registrar’s office and used a fake statement of result to procure a fake conversion to officers cadre.”

“John Mpama Odey conversion to officer cadre was very irregular and insolence  to the established civil service rules. He did not obtain any approval/clearance from the civil service before he went to all the fraudulent schools he claimed.”

“He did not pass the compulsory examination for administrative/professional officers that qualifies civil servants to graduate to officers cadre or and directorate cadre,” the petition signed by Emmanuel Bessong and Reverend Reko Ekpe read.

They also accused Odey of enjoying a progression during his service year and claimed he observed his NYSC program in Calabar Depot when he was also a staff of the state civil service.

“Comrade John Mpama Odey also obtained His NYSC certificate using dubious means as at the time he was still in the service. Granted that he finished his NYSC in 2003, he should have been on grade level 9 in 2003. Hence his progression was wrong. He also procured promotion without appropriate briefs.”

“Questionable NYSC certificate: as at 2003, his official age was 35 years and he is above the mandatory legal age to obtain a certificate of national service. A cursory or in-depth study in NYSC office in Calabar shows that it was one Rita who signed and collected the certificate for him.”

“A week above 30 years of age, one is entitled to a certificate of exemption from national service so he should show his approval to go to school since he was a civil servant.”

“Below 30 years of age, one is entitled to a certificate of national service and John Mpama Odey was 35 years as at when he claimed he served. Part time program attracts exclusion certificate from NYSC only.”