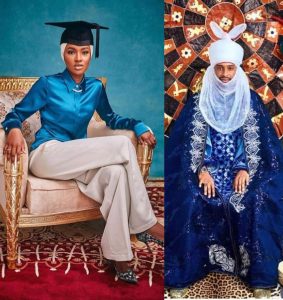 Some guests invited for the wedding of President Muhammadu Buhari‘s daughter, Hanan, and her husband-to-be, Mohammed Turad, son of an ex-lawmaker from Kaduna State have reportedly declined invitation to the occasion due to fear of COVID-19.

According to SaharaReporters, Presidency sources revealed the development.

The married has been fixed for September 4, 2020 and being the first-ever wedding to take place inside Aso Rock Villa, expectations are high.

Recall that the First Lady, Aisha Buhari, recently traveled out to the United Arab Emirates to shop for Hanan’s nuptials, which has  dubbed ‘The First wedding’.

Further report revealed that the declination of invitation to the event by top guests might not be unconnected with the reported COVID-19 status of President Buhari’s closest aide and Senior Special Assistant on Domestic Affairs, Sarki Abba, on Tuesday.

A source which spoke with SaharaReporters said, “Abba tested positive for COVID-19 two weeks ago but his current status as we speak is unknown, whether he has tested negative or not.”

“All I know is that there’s conspiracy of silence with regards to his status.”

Even though Abba has recovered and has since resumed, he is still considered unsafe to mingle with others inside the Presidential Villa by some persons including the First Lady.

It was reported that the first lady had vowed not to allow Abba attend the wedding ceremony as a result of this situation.

Aisha is also opposed to the idea of Mamman Daura, a nephew and close confidant of Buhari, attending the event but the President has reportedly insisted on having him be a part of the occasion.

It is, however, not known if Daura is in Nigeria at this time or not after being flown in a private jet to the United Kingdom after exhibiting respiratory difficulties with symptoms similar to Coronavirus in August.

“Aisha Buhari is insisting she must not see Sarki Abba and Mamman Daura at the wedding of her daughter. Though Daura is presently out of the country but incase he comes back to Nigeria before the event, the President said he should be allowed to attend.”

“Though Abba has recovered, he resumed yesterday after two weeks in isolation. I still don’t know why the First Lady doesn’t want to see him at the event. The press statement by the Presidency denying that Abba never tested positive was planned to douse tension.”

“Apart from the First Lady, most of the guests invited are afraid. You know most of the President’s friends are those above 60 years and they are vulnerable to the virus,” a source said.

It was also gathered that invitation to the ceremony is being streamlined and as a result the groom’s family have made separate arrangements to host guests on Saturday.