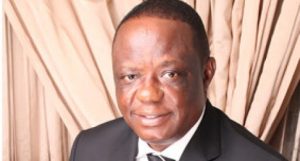 Naija News reports that the defendants to the suits are the Honourable Attorney General of Edo State sued as the 1st defendant, and Crusoe Osagie, the Special Adviser, Media and Communication Strategy, joined as the 2nd defendant.

In a statement on Tuesday, the Media Adviser to Captain Hosa, Samuel Ajayi, said the orders were given on Monday, August 10, 2020 in Abuja.

Ajayi said the High Court granted, among others, orders “restraining the Edo State Government, whether acting through the first defendant and or 2nd defendant, its agents, representatives, officers, servants, proxies, assigns, trustees or any other person howsoever described, acting directly or indirectly for the Edo State Government, from publishing, causing to be published, circulating, further publishing, reporting or publicising the publication captioned ‘Okunbo, Oshiomhole making plans to disrupt Edo Governorship Elections,’ and or any other related defamatory publication by any means whatsoever, including publications by/on print, electronic and social media platforms.”

In a suit filed by counsel to Captain Hosa, Dr Adedapo Olanipekun, had also sought a declaration that the defendants’ publications of 20 July, 2020, captioned “Okunbo, Oshiomhole making plans to disrupt Edo Governorship Elections,” which appeared on pages 26 and 53 respectively of The PUNCH and THISDAY newspapers, were false, fabricated, misleading, malicious, unfair and defamatory.

Captain Hosa is also seeking the sum of N4,000,000,000 (Four Billion Naira), “being aggravated and exemplary damages for the embarrassment, inconvenience, losses and damages done to the claimant’s person, character and interests, as a result of the defendants’ libellous publications of 20 July, 2020; (with) cost of legal representation/action assessed at N50,000,000.00 (Fifty Million Naira).”