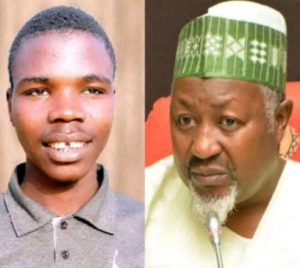 Six months in imprisonment has been handed to a young man whose name is given as Sabi’u Ibrahim Chamo, for allegedly accusing the governor of Jigawa State, Badaru Abubakar of fraud.

Naija News understands that the middle-aged young man was awarded the sentence by chief magistrate’s court sitting in Dutse, the state capital.

It was gathered that Chamo was first arrested for alleging that the governor had defrauded aspirants of the All Progressive Congress in the state, promising to give them party tickets.

Naija News understands that Chamo made the allegation in a post on Facebook. He has, however, pleaded guilty during the trial, after the first information was read to him. The court, however, sentenced him to six months in prison, with options of payment of N20,000 fine and 20 strokes of cane to serve as a deterrent to others.

Meanwhile, Naija News reports that some yet to be identified gunmen on Monday, December 28 attacked and murdered one Mrs Funmi Folorunso close to her apartment in Akure, Ondo state.

According to reports, the mother of one was gunned down while in her car as she approached their apartment at Oda Road, in the Kajola area of of the state capital.