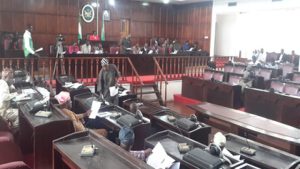 The suspension of the Ondo State Deputy Speaker, Hon Irioju Ogundeji, and three other lawmakers has been dismissed by a State High Court sitting in Akure.

Recall that the leadership of the Ondo Assembly had suspended the lawmakers over what was described as un-parliamentary act.

The lawmakers were reportedly among the nine lawmakers that kicked against impeachment move against Deputy Governor of the state, Hon Agboola Ajayi.

Justice Ademola Bola in his ruling said the Speaker, Hon Bamidele Oleyeloogun lacked the power to suspend any member of the Assembly.

While describing the suspension as illegal and unlawful, the court also ordered the Assembly to immediately pay all the entitlements of the affected lawmakers with N5 million Naira damages also awarded.