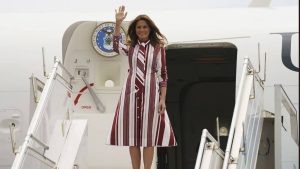 First Lady of the United States of America, Melania Trump has insisted that every legal vote should be counted in the 2020 presidential election of the country.

This she stated in what is her first tweet since Joe Biden emerged President-elect, defeating her husband Donald Trump in the race to the White House.

Towing the earlier submission of her husband, Mrs Trump on Sunday, tweeted that every legal vote should be counted, adding that America’s democracy must be protected.

She wrote: “The American people deserve fair elections. Every legal – not illegal – vote should be counted. We must protect our democracy with complete transparency.”

The American people deserve fair elections. Every legal – not illegal – vote should be counted. We must protect our democracy with complete transparency.

Meanwhile, there have been claims in the media that Melania is counting down on days and is waiting to divorce Trump after they leave the white house.

According to a new claim from a former aide, Omarosa Manigault Newman, the 15-year marriage of Donald and Melania Trump was “over” and “Melania is counting every minute until he is out of the office and she can divorce”.

Why did Melania Trump not divorce him earlier? Responding to this, the former aide said Donald Trump would have found a way to “punish” her if she had left while he was still in office.