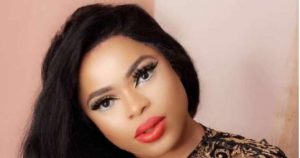 Popular Cross-dresser, Okuneye Idris Olanrewaju, popularly known as Bobrisky,  has reportedly been arrested by officers of the Nigerian Police force.

Naija News learnt that the controversial socialite was picked up at his residence last night in Bera Estate, Chevron Drive, Lekki, Lagos and whisked away to an unknown destination

He was, however, brought back to move his cars. Unconfirmed reports suggest his arrest is in connection with his cross-dressing lifestyle which is heavily frowned upon in Nigeria.

A video was also seen were s some armed policemen outside his residence. One of the officers was also quoted as saying, “we will turn him back to a guy.”

Recall that his birthday party was disrupted last year by Lagos State Police Command, he, however, managed to evade arrest.

Otunba Olusegun Runsewe, the Director-General of the National Council for Arts and Culture, had the labelled Bobrisky as a National disgrace and a wrong influence on the younger ones. He also threatened to deal with him.