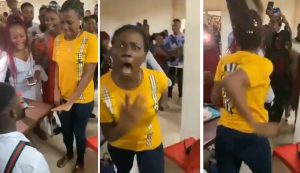 It was total confusion on Saturday as a marriage proposal in few seconds turned to madness scene.

The unidentified lady in a video spotted on the internet was seen stretching out her hand to receive a ring from her lover who had proposed in the presence of numerous people.

The man could be seen on knees try to put the ring on her finger while people at the location urged the lady to say yes to the proposal.

The incident, however, took another turn as the lady jumped up in excitement for her boyfriend to put the ring on her finger, she immediately started acting like someone who has gone insane.

Meanwhile, a 35-year-old man identified as Tochukwu Chidi has been reportedly murdered during a heated argument in the Bariga area of Lagos.

Naija News understands four members of the Oodua People’s Congress have been arrested by the police for allegedly responsible for Chidi’s death.