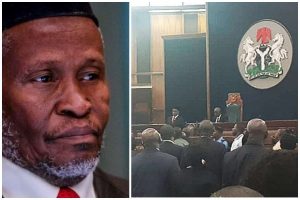 Naija News reports that this was made known in a statement on Monday by the Director of Press and Information at the Supreme Court, Dr. Akande Festus.

The statement published by Daily Trust reveals that administering of oath will be at the main Courtroom of the Supreme Court, adding that the event will formally flag off the 2020/2021 legal year of the Court.

Spouses and friends of the 72 newly appointed Senior Advocates will not be allowed into the Courtroom as was done in the past, in strict adherence to the COVID-19 protocol

“Similarly, the number of dignitaries and other stakeholders will equally be limited as crowd will not be allowed inside the Courtroom,” the statement reads.

“The Court’s Foyer will be handy to accommodate those who will not be admitted into the Courtroom, as the programme will be streamed live on the giants TV screens that are placed in strategic positions within the Court premises.

“For those that will be in their respective homes and offices, they can as well watch the various programmes live on YouTube, Twitter, Instagram, Facebook, Zoom and other social media platforms, as we are ever poised to make everyone have a feel of every single event.

“The Honourable Chief Justice of Nigeria will, as usual, give the state of the judiciary address and also present the score card of the Supreme Court in the outgone legal year, while keeping the nation abreast of the developments in the Nigerian Judiciary.”